Beside a small gravel carpark next to State Highway 1 on the Kapiti Coast in New Zealand, huddled in a small v between the shoulders of two hills, is a remnant of ancient kohekohe forest and sub-tropical bush. It is crammed with palms, vines, and ferns. Most people in the area know it as Nikau Reserve. The signs on the highway point to Nikau Reserve. Such imaginative naming comes from the abundant nikau palms, the southernmost variety of palm. There are probably thousands, from the baby, feathery sprouts of green poking above the leave litter on the forest floor, to two hundred year old soaring giants, spreading their umbrella canopy ten, twelve, fifteen metres above our heads. These are Doctor Seuss trees, with their long, striped, green trunks tapering into a polished, bulbous crownshaft and a fountain spray of fronds.

In the spring, lilac flowers bloom from crownshaft and after the flowers, the fruit. Red berries cluster in strings, like dangling necklaces of beads, tantalising treats for kereru. Fantails, grey warblers, tui, bellbirds and kereru fill the gaps between the trees with song and wingbeats. Creatures scuffle in the chaos of the forest floor. Brittle, brown nikau fronds too large to lie prone lean at an inebriated tilt between tree trunks. The foot of the fronds balloons into a scoop as big as a bucket, the head flourishes two ranks of spears. A narrow path loops through the trees and thin, shallow streams meander either side. At the apex of the loop, a fork in the path holds out the promise of a steep, twenty minute climb to a lookout with panoramic views: coastal plains, townships, the glittering turquoise Tasman Ocean, Kapiti Island, the coastline north, and on clear days maybe even a glimpse of a volcano on the skyline. 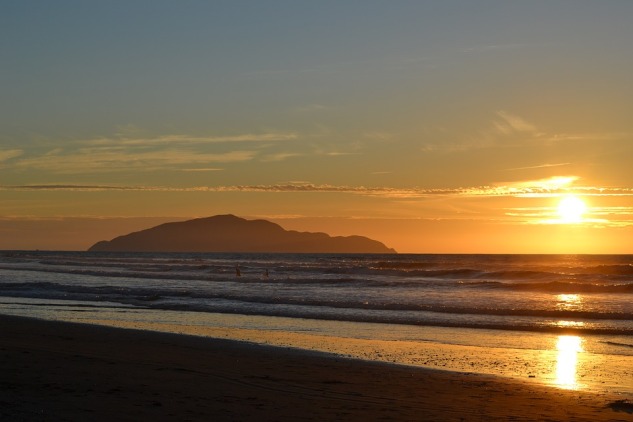 This four acre gem is two minutes drive from my home. On a day when the sun is hot

enough to fry any bare skin, the cool green dim, trellised with green-gold sunlight, is a haven.

On a day when grey rain stripes a greyer sky, listening to the raindrops tapping on an impenetrable roof of leaves is better than any meditation music. On a day when I need a walk, but my zebra joints fall out of their sockets if I walk too far, or the wind is too vicious for my face, this sheltered, ten minute loop track is the ideal solution. And on a day when two small children are thirsty for adventure, this place is the perfect destination. 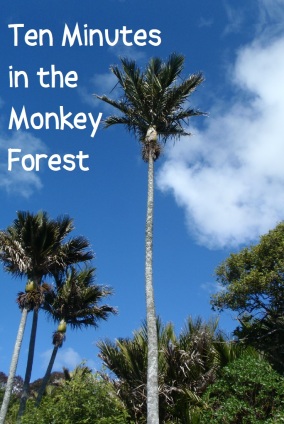 These two small children are our six year old and seven and a half year old grandchildren. They have been coming here with me and my husband for five years now. To them, it has never just been a walk through the Nikau Reserve with Oma and Opa, or a scramble up a rocky path through pillars of trees to a pretty view at the top. It is far more exciting. It is freedom and exploration. It is play, curiosity, mystery and discovery. It is The Monkey Forest.

The first time we brought them here they were toddlers, intensely curious about the world around them and beginning to soak up knowledge they spouted at every opportunity, from naming the raucous bird with the white ruff as a tui, to explaining why few flowers grow on the forest floor.

Then they were young enough to believe, when we asked them if they’d like to come on an adventure to the Monkey Forest with us, that they really would see some monkeys. They loitered for at least half an hour, peer up into the distant canopy, convinced they might see the whisk of a monkey tail or the flick of a monkey paw. A few stones thrown at judicious intervals into the undergrowth helped keep the magic alive. 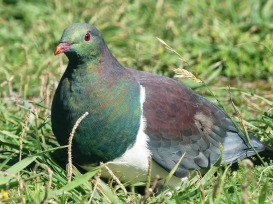 Sometimes a woodpigeon helped out by dropping some shiny red berries from its beak, or flying through the trees with that drum roll beat of wings that could surely be a monkey jumping from branch to branch.

While they were looking for monkeys, they were discovering so many other treasures.

“Look, there are flowers growing up in that tree!” 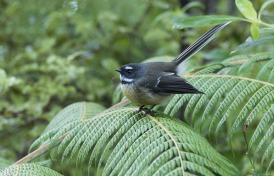 “A furry, curly monkey tail.” And the fun didn’t stop when they decided the monkeys were probably all having their afternoon nap so the closest they were going to come to one was the coiled brown fur of new-growth on the ferns. There was still paddling to be done in the little stream beside the path, and leaves and stones to be washed. There were stones to be thrown inside drainage pipes, and shouting to hear the echo.

They are wiser now. They both know that when we said monkeys, we might just have meant them. Seven year olds know that monkeys don’t live in New Zealand. He knows that nikau palms take a hundred years or more to grow ten metres, that each stripe on the trunk is a scar of a fallen leaf. Six year olds know enough Maori to call the fantail piwakawaka and the woodpigeon kereru. She takes my pronunciation in hand, explaining how to get that tricky rotic r. ki-di-do, Oma. It’s a soft d.

And they know too, that you can pack a lot of adventure into ten minutes in the Monkey Forest.

Chronic pain conditions make it very difficult to stay as involved and active in life as we’d like to, or as we were before we were disabled. Sometimes it feels easier to hide away at home, and avoid company, but that’s a surefire route to depression. Sure, there are always times when going out at all isn’t possible. But there are plenty of occasions when breaking activities into bite-size pieces helps you manage your condition without missing out altogether. Put a time limit on social events e.g. 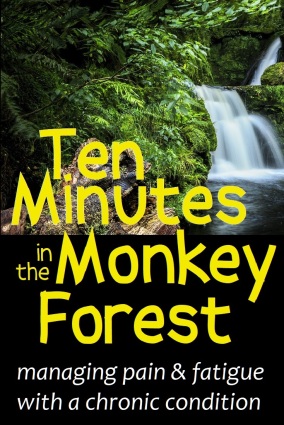 1 – Going to a party for a whole evening is beyond you? Drop in for ten minutes, or half an hour

2 – An evening in a restaurant too much? Join later for dessert and coffee

3 – A long event you can’t avoid? Take frequent rest breaks. Keep pillows and a blanket in your car for somewhere to nap

4 – Spending quality time with children? Structure activities around local places, and factor in plenty of independent play and exploration.

5 – Learn your own limitations, and think quality, not quantity. Remember, you can pack a lot of adventure into ten minutes.

42 comments for “Ten Minutes in the Monkey Forest”