If only pain were as easy to measure as, say, volume. As height, or weight, or speed. Medical professionals try to quantify it. How bad is your pain on a 1 to 10 scale, with 10 being the worst pain you can imagine?

Most health professionals I have come across also add ‘childbirth counts as 10.’ This always puzzles me, as using childbirth as a standard excludes probably 70% of patients. It even manages to exclude women who have experienced childbirth, but had relatively painless ones. For me, at my most exaggerated estimate, I would only put childbirth at 6 on the scale. 4 is more accurate. Menstrual cramps were far worse than labour.

I always struggle with the ‘how bad…’ question. If I have sliced a centimetre deep gash into my finger with the bread knife, and someone says compare this to the worse pain you can imagine, I can easily imagine something much more painful; say, a starving wolf sinking its yellow, rotting fangs into the flesh of my finger and gnawing it to the bone before ripping it off at the knuckle. That would hurt way more. 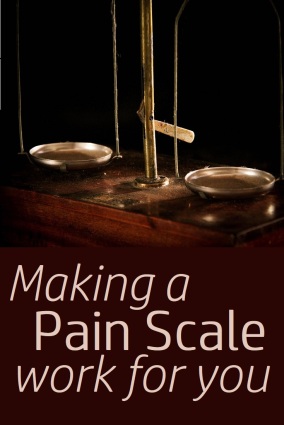 Some medical professionals ask ‘How bad is your pain on a 1 to 10 scale, with 10 being the worst pain you have ever experienced?’ It’s easier to answer. A decade ago, I had gallstones, and the pain was the worst I’d ever experienced. It left me curled up in a ball, unable to function at times. So, yeh, that was a 10. But since then, I have experienced pain that rendered me virtually catatonic. If the current pain is more painful than the last pain recorded as a 10, it makes the pain scale useless. 10 is already the worst. Saying 11, or 12, or off the scale just sounds like exaggeration, and is more likely to make medical people think the patient is just a drug-seeker, or the pain is only psycho-somatic.

For those of us with a chronic pain condition, where pain is a constant companion ghosting your every footstep, these questions are particularly arbitrary and clunky. I have trigeminal neuralgia, a condition very often described by doctors and patients as the worst pain known to humankind. The trigeminal nerve, which is responsible for sensation and movement in the face, is so damaged it misreads signals and reacts with episodes of extreme pain. A soft spring breeze, for example, feels like my face is being sliced by knives.

I also have cluster headaches, a condition also often described as the worst pain known to humankind. The pain is a jack hammer drill, thumping and grinding a shaft down through my forehead, my eye and to my jaw. It is a flaying, acid flame blanket clinging to my cheek. It is a fiery, burning tennis ball trying to burst out of my eye.

Judging by the worst pain known qualifier, I guess most people would think both conditions count as a 10 on the pain scale.

But the truth is, sometimes they don’t. Just because something is described as the worst pain known, it doesn’t mean every attack, every flare up of pain is automatically at the top of the pain scale. Sometimes, my cluster headache just makes my eye hot and dry, and my cheek sting. Sometimes my TN is a dull ache, or an annoying sensation of pins and needles.

Conversely, just because a pain condition does not have worst pain known as a descriptive tag, does not mean it can’t cause episodes of pain at the top of any pain scale. I have other conditions. Sjogren’s Syndrome, which has phases of causing my joints to become stiff, inflamed and painful. Ehler’s Danlos Syndrome, which means most of my joints dislocate as often as most people do up buttons on clothes. And as easily. These two conditions don’t even feature on top ten lists of the most painful medical conditions. Yet with both these conditions, I have had episodes where I was fainting or unconscious.

The label of worst pain known is spectacularly unhelpful. It gives no useful information about the actual pain experience. And a number on a pain scale is spectacularly unhelpful, as it doesn’t convey useful information unless the scale is calibrated in a meaningful way. Description and experience of pain needs to be conveyed clearly so patients and medical staff can give the right, most effective help and treatment.

Through a Facebook support group, I often see other people also experience difficulties explaining their pain. So I decided to have a crack at creating a pain scale, with visual, colour-coded cards I’d find easy to use, and that makes sense whatever the type of pain.

Now I feel much more confident about giving medical people a useful answer.

27 comments for “How to Measure Pain”