Our avian wildlife put on quite a show for us on Friday morning.

We keep a bag of birdseed by the front door, and every morning pour handfuls of it on the fence outside our dining-room window, so we can watch the birds foraging while we eat breakfast. We always see a swarm of squabbling sparrows and their more docile cousins, dunnocks, diving in for the juiciest seeds. A couple of chaffinches and greenfinches often join the fray, and once or twice a silvereye has dropped by to see what’s going on.

Today, we tried something different. We scattered the seeds on the driveway, where we could watch any birdie activity from the comfort of our sofa. It was a good move. Within minutes, the concrete driveway was a moving carpet of birds. The chaffinch couple obviously put the word out to their mates, because I counted at least ten of them scrapping with the sparrows.

Eight greenfinches and two silvereyes came along too. Even several blackbirds and starlings, who don’t usually have any interest in the fence-feeding, showed up to check out the party, skirting around the edges like bouncers at a nightclub, fluffing out their feathers and puffing out their chests.

Overseeing the melee of seed-munchers were a couple of tui, sitting in the neighbours tree and turning their beaks up at the sugar-free fodder. On the garage roof, a rotund seagull strutted back and forth along the edge of the gutter, giving its best attempt at looking half-starved.

It was all very distracting when I was supposed to be writing a poem or three for different National Poetry Day events.

They reminded of the first neurologist I saw, when the lightning-bolts and hammer-blows of pain in my face had not yet acquired a diagnosis. Or at least, my GP and I were pretty sure the diagnosis was trigeminal neuralgia, but the neurologist was less clued up than we were.

Despite his mis-diagnoses, the neuro did at least try to treat the pain I was experiencing. First he prescribed Tegretol (Carbamazepine) and Baclofen. Tegretol is considered these days to be a first line of treatment for TN (trigeminal neuralgia) and other nerve pain, as for many patients it is very successful at stopping the pain.

It was for me too, in terms of pain relief.
Or at least, it looked like it would be – I’d begun to get some pain reduction, when some side effects kicked in – extreme, almost vegetative fatigue coupled with sudden onset of suicidal thoughts. Those hit me like a wrecking-ball smashing into a brick tower. So the neuro took me off Tegretol, and replaced it with Gabapentin (Neurontin).

As the neuro described Gabapentin as a second choice, I remember asking “OK, the $64,000 000 question – how effective do you expect Gabapentin to be?” The answer was 100%. The side effects I’d experienced with the Tegretol ceased within twenty-four hours of coming off it, and apart from slight dizziness the first couple of days I didn’t experience any side effects to the Gabapentin. (I learned later this was probably because I’d been started on the correct dose and titrated up to a therepeutic dose at a slow rate. With the Tegretol I’d been started on too high a dose.)

No side effects was fantastic. But 100% pain relief was not forthcoming. After three or four weeks my pain had reduced, but by about 30 to 40%. I was still on a relatively low dose, but the neurologist decided that as it hadn’t worked 100% by then, it wasn’t going to. He said to come off the Gabapentin, and told me there was nothing else he could do.

“Watch the birds out of the window,” he said. “That’s what I do to distract myself from the pain when I’ve been sitting too long at a conference and get an aching bottom.”

If I’d been a bird at that moment, I’d have pecked his eyes out.

Now, I’m all for watching birds as a distraction technique because I know as part of a toolbox for managing to live with pain, distraction helps. Alongside breathing exercises, relaxation, meditation, mindfulness etc.

But as a shoulder-shrugging, slapdash suggestion to a problem that has many other avenues available to the doctor that cares to explore them, no way is ‘look at the birdies’ a viable solution.

Because my GP was the kind of doctor who does explore other avenues, we discussed different treatment options and research papers and came up with a treatment plan that meant I wasn’t just left looking at the birdies. (Though I’m pretty sure the neurologist would have needed to bingewatch birdies to cope with his sore bum from the naughty chair he’d have been sent to after the hospital heard from us about his antics).

So what are the medical options available aside from ornothological prescriptions?

Anti-convulsants were developed to treat the epilepsy, not pain, but it was discovered that they are good for treating nerve pain because they slow down electrical impulses which reduces the nerves ability to send pain messages.

Tegretol and Gabapentin are the first choice of medication for most TN patients, but there are several others available if these two are no good.

They are not like over-the-counter pain meds that you take as and when you have pain. To control the neuralgia pain, they need to be taken regularly.

These do what they say on the box and reduce muscle spasms.

Muscles contracting or twitching is a trigger that exacerbates trigeminal neuralgia pain.

They will sometimes be prescribed as the only treatment, or alongside anti-convulsants. 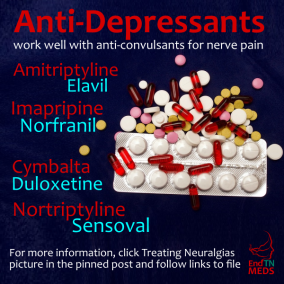 It’s thought they work by increasing neurotransmitters in the spinal cord which in turn reduces pain signals.

Trycyclic antidepressants are most often used for pain. 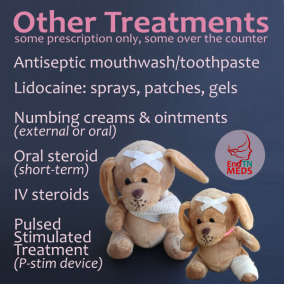 There are a number of options available either by prescription or bought over the counter.

These are useful to have on hand for extra relief.

Some days I wouldn’t be able to clean my teeth without painful lightning bolts if it wasn’t for my extrastrong, antiseptic toothpaste numbing my mouth enough to get the job done.

My pain is far better controlled on Dilantin than on Gabapentin, but it’s not perfect. But I’ve noticed when I have IV steroid treatments for my Sjogren’s Syndrome symptoms, I find it also relieves my neuralgia symptoms.

Some people can’t take conventional medications, some people don’t want to, and some need additional support.

Talk to your doctor if you are trying something different, like natural remedies. Natural doesn’t necessarily mean safe, and some remedies interact badly with some meds.

Remember, I’m not a doctor. I’m sharing information I’ve learned through my own research and experience, but if you are having problems with your meds or suspect you have trigeminal neuralgia or need any other medical advice, see a doctor.

Most doctors don’t belong on a naughty chair!

← Poems, Prompts and Plums
Getting Mail →

33 comments for “Watching the Birdies”